Strobe lights and loud noises will keep me away from opening week of The Curious Incident of the Dog in the Night-Time, Yes. I’m concussed again. (Insert a choice string of expletives here!!) In November 2015, eleven months after the first concussion, I saw the show on Broadway. Even in my somewhat addled state, and despite flinching from the light and sound, I loved this production. 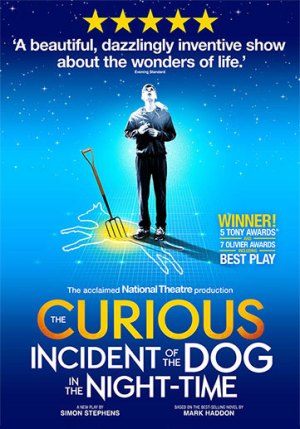 The play is based upon the best selling novel of the same name. I had read the book some years before and was curious about how it might be produced. Let me just say it’s creative and edgy. Both are told through the eyes and ears of a teenage lad with an Aspergers-like syndrome who is trying to make sense of the violent death of a neighborhood dog. The Broadway production demonstrated the magic of theatre where the whole is more than the sum of its parts (script, direction, acting, set, lighting, sound). I expect the Mirvish production to be a match for the one I saw two years ago.

Call a friend and book tickets to see The Curious Incident Of The Dog in the Night-time, then tell me how you liked it. I’ve given up my tickets for opening week and will see it later in November.

Bonnie Lendrum is the author of Autumn’s Grace, the story of how one family manages the experience of palliative care with hope and humor despite sibling conflicts, generational pulls and career demands. Autumn’s Grace is a powerful commentary on the need for well-organized and well-funded palliative care in private homes and in residential hospices. It’s a gift to people who would like to be prepared as they help fulfill the final wishes of a family member or friend.

Mark HaddonReviewThe Curious Incident of the Dog In The Night-TimeTheatreToronto